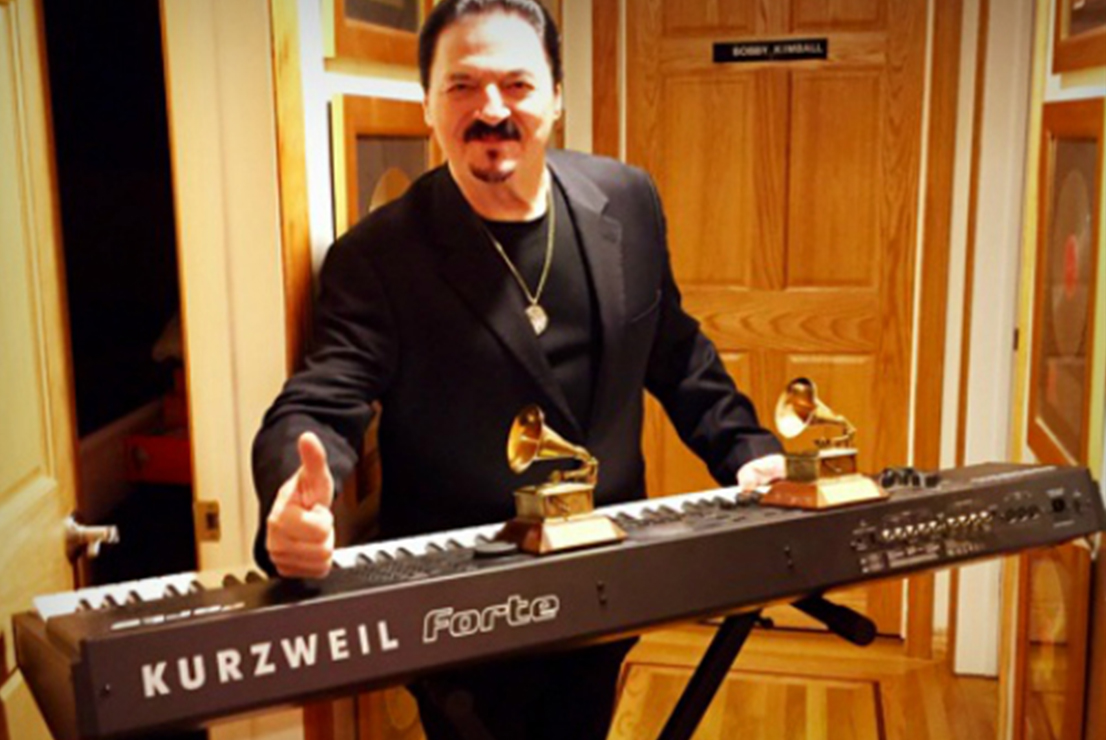 “I love my Kurzweil! I’ve had a PC88 for almost 30 years and that’s what I have been playing on stage almost all the time. But my brand new Kurzweil Forte brings it to another level! Kurzweil – that’s what makes it good!”

Bobby started playing piano at the young age of 4 years old. His Mother had the rare gift of “Perfect Pitch”, and could play just about anything she heard. This was an inspiration to Bobby and his oldest brother, and soon both of them started their own bands when Bobby was only 8 year old. The members of Bobby’s band were the younger brothers of his oldest brother’s band.

Growing up in Louisiana was truly a gift for Bobby, due to such a wide variety of music styles and fantastic musicians to play with. Living about 10 miles from the Texas border played a big role in his music career, because there were so many 5000 seat clubs stationed along the Texas border inside Louisiana. The drinking age in Texas was 21 years old, and in Louisiana it was 18 years old. This leaves little doubt as to why these 5000 seat clubs were completely packed on the weekends, and it was a huge influence on Bobby’s decision to become a musician instead of a Medical Doctor. After 5 years of University studies in the medical field, Bobby decided to follow the path that made him the happiest, and he became a full-time musician.

After playing and singing with about 15 different bands in Louisiana and Texas, Bobby ended up in a band called “The Levee Band”, which became a high watermark of musicianship and talent. In the middle of a tour with The Levee band, Bobby received a call from a long time musician friend, Jon Smith, who asked him to come to LA and sing with the musicians who had made up the band “Three Dog Night”, one of Bobby’s favorite bands ever. He had to make a very hard decision to leave, not only one of the best bands he had ever played with, but also his native Louisiana home.

After arriving in LA to meet the band, things changed drastically for Bobby. He was finally in the city where the music industry thrived, and most of the great musicians and singers who had created the hit songs that drew him into the fold to become a musician were living and working. After this band got together, they signed a contract with CBS Records under the name “S.S. Fools”, which was the title of the first and only LP recorded by them. This band lasted for about 18 months before Bobby decided to leave them for better opportunities. During the rehearsal stages of “S.S. Fools”, Bobby first met, and became friends with Jeffery Porcaro (then, the drummer with “Steely Dan”), and David Paich (who had just co-written the Grammy winning “Silk Degrees” LP with Boz Scaggs). Jeff and David were at most of our rehearsals, because they loved the music of “Three Dog Night” as well. A few months after leaving S.S. Fools, Bobby was asked by Jeff and David (the initial founders of Toto), to become the lead singer. There were no questions, nor hesitation about his decision to join this band. They were the best musicians Bobby had ever heard, and a perfect platform for his voice.

The very first LP Toto released, entitled “Toto”, broke out with the massive hit single, “Hold The Line”. The band was nominated for a Grammy as “Best New Band” that year. Toto’s music was very well received and the band built a huge following of very loyal fans. Bobby was in the band for the recording of the first 4 records (“Toto”, “Hydra”, “Turn Back”, and “TotoIV”). It was the “Toto IV CD” that absolutely defined the band, and it’s future. At the 1982 Grammy Awards, The “Toto IV” CD was nominated for a “record breaking” NINE Grammy Awards. Out of these nine nominations, the band won SIX Grammy Awards, based on the strength and popularity of the song, “Rosanna”. Also, Steve Lukather, co-writer of “Turn Your Love Around”, with Jay Gradon and Bill Champlin, won a 7th Grammy. Altogether, the band brought home 7 Grammy Awards that evening, …which set a precedent for the number of Grammy Awards ever won by a single band in one year.

It was in the middle of the recording of the 5th CD that some differences broke out amongst the members of the band, and Bobby was asked to leave Toto.

Bobby moved to Germany for 6 years, and recorded his first CD there with Frank Farian called “The Far Corporation”. This is where he met Simon Philips, who played drums on the CD. The CD did very well in the charts in Europe, and a 2nd CD was in the works by then.

After several vocalist changes with Toto, in 1998, Bobby was asked to rejoin the band, which put the band back to it’s most original form, and he remained the lead vocalist for the next 10 years until 2008.

Bobby spent about 2 weeks in 2011 touring in Kuwait & Iraq for the US Troops. “It was one of the most interesting tours I’ve ever done. I learned so much about what was going on in the Middle East, that most people have no clue about.”

Since 2008 Bobby has been touring the world over, non-stop. After several projects in the last years, including projects with John Zaika and a Duets CD with Jimi Jamison from “Survivor”, Bobby has just released in 2016 a new solo album called “We’re not in Kansas anymore”, available through King Records.

“I have so many projects going at the same time, it’s keeping me busier than ever. I love my work, and I’m having more fun now than I’ve ever experienced in music.”