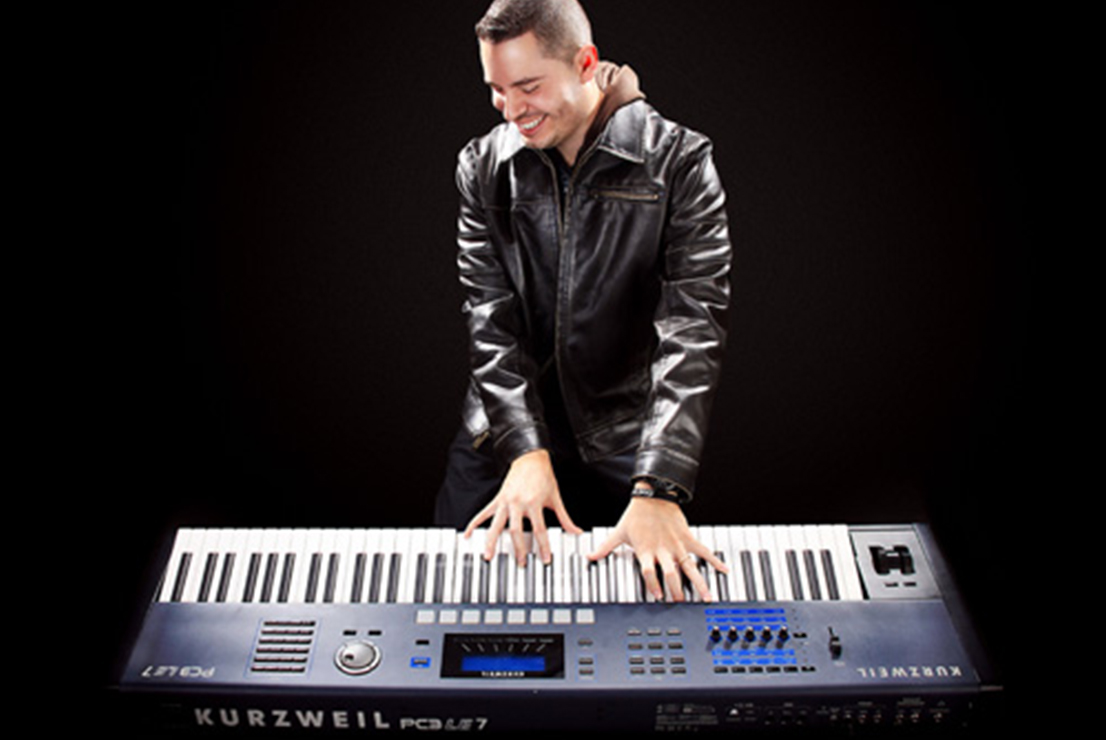 “As far as most modern keyboard players go, gone are the days in which we could get away with bringing a single keyboard to an event/session. In most cases setups are now much more complex. In addition to multiple keyboards/synths, VI’s (virtual instruments) and DAW’s (digital audio workstations) are also a part of our lives. That is why I switched to the Kurzweil PC3LE7 as my main workstation and master MIDI controller. Kurzweil did what no other manufacturer has done they created a keyboard with monster factory sounds and COMBINED IT with amazing MIDI controller capabilities. I can assign every fader, knob, switch, and those really handy drum pads to do whatever I want! Trigger any samples/loops/sequence/click tracks, adjust volumes, filters, modify pretty much whatever parameter I want on any VI or DAW I may be using, on the fly! Aside from MIDI heaven, The PC3LE’s KB3 mode is amazing! I love crunchy, tube-driven, in your face, just plain LOUD and punchy organs and Kurz has got them! The Rhodes and Wurli selections are also great from factory. They did a great job overall on their preset sounds. With the upgraded Version 2.10, the V.A.S.T. System is programmable, and I felt that came in handy when I needed to patch in different effects to some factory sounds. The icing on the cake to me is the Quick Access mode. This mode allows me to have 10 different sounds (including complex setups) available at the click of a button (and the sounds don’t cut out while changing them!). No lists to scroll through with no sound in the middle of an event.. YES! So at the end of the day, there isn’t much LE in the Kurzweil PC3LE7. I am very satisfied with it. It is clearly noticed that Kurzweil did their research gave us keyboard players the tools we always wanted and actually need to successfully do what we do best. Play :)”

Felipe Miranda’s style of playing has been sought after by many of today’s Christian artists. He is known as one of the top pop/rock worship keyboard players and sound designers in the New England region (and growing). Whether as a producer, arranger, session musician, music director, or keyboardist, Felipe performs with artists such as Julissa, Christine D’Clario, Danilo Montero, Tercer Cielo, Elaine de Jesus, Danny Berrios, Marquinhos Gomes, Marcos Goes, Carlinhos Felix, Andre Valadao, Cassiane, Nancy Amancio, Rocio Crooke, Samuel Hernandez, Luciano Manga, to name a few. Born in Brasilia, DF, Brazil. Felipe fell in love with music at an early age through his dad’s amazing collection of LPs. “I remember when my father used to bring home new LPs, I couldn’t wait to pop them on, and just listen for hours”. That collection varied from Pink Floyd to Ray Charles, and everything in between. “I was really glad my father was always such a music fan. I used to listen to him play his les paul, picking away at the same notes on the blues scale over and over again. The cool thing was that it just felt different every time. I think that was the most important lesson my father taught me – without knowing it. Above technical skill, it’s all about the vibe, the feel, the passion!”

At the age of 14, Felipe started developing his ears by playing with the worship team at his local Brazilian church and sharpened his techniques by studying classical music for four years at the Royal Academy of Music. By the age of 21, Felipe had decided to follow his path in contemporary Christian music, and was already traveling with many artists. By the age of 24, local recording studios were requesting his services as a musician and as an arranger. He then set into the path of music production by studying several mixing, engineering and production books, and more importantly by learning from local engineers and producers hands on. Aside from working with several GRAMMY nominated and award winning artists, he is also credited as a published songwriter, featured in Welves Fernandes album “Em Tua Presenca” due to be released mid 2013, along with other compositions that are currently being arranged for upcoming worship albums.

Today Felipe is the media and worship music director at Liberty Churches in Shrewsbury, MA; owner of Big Faith Music (a company which embraces his recording studio, his work as a producer, arranger, mixing engineer, and freelance musician). Also a member of ASCAP, both as a publisher and songwriter. Felipe’s latest recording work can be heard on Julissa’s “Metamorphosis” album, released on Oct 23, 2012.