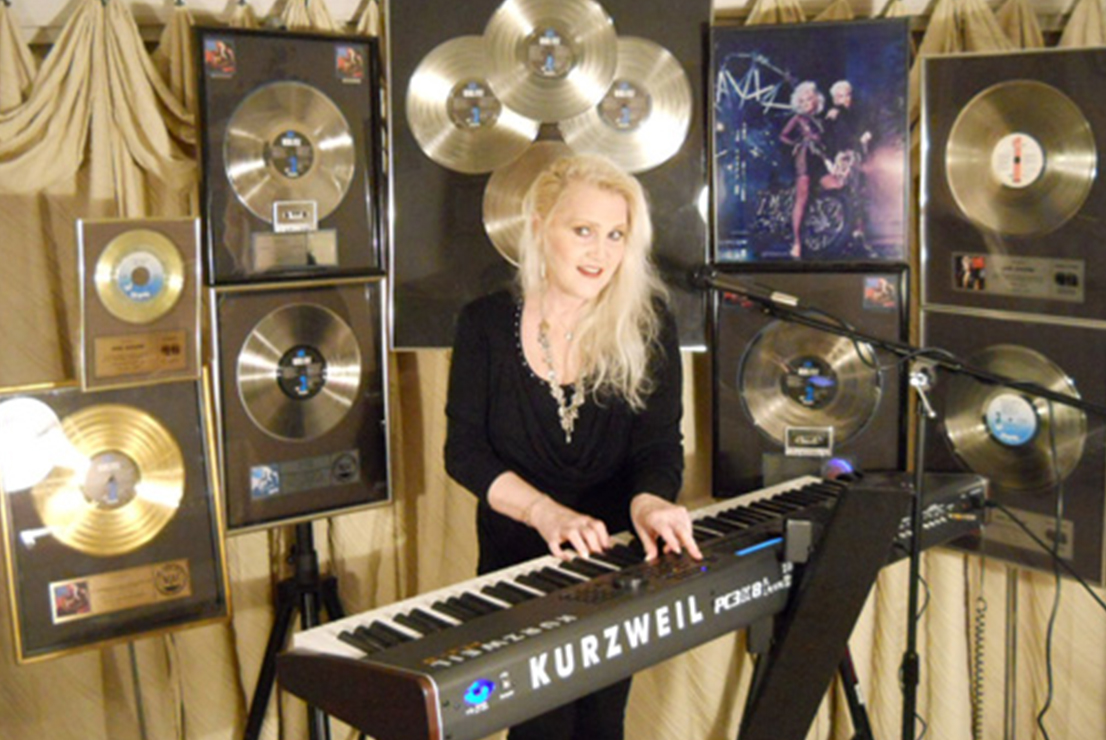 “Before the PC3K8, the K-2000, “Kay” was my favorite axe, and the phrase so often used with Kurzweil “Esto Immortalis” was my resolve each time I programmed, sequenced, and played it through the years. I can load in my own sounds/sequences from the K2000 to the PC3K8 via USB jump drive, and use USB out to a computer for remote editing. The very realistic sounds are a unique characteristic of Kurzweil – no other synth can compare. The virtual analog sounds are amazing to capture the sounds of the older synths I played in the Billy Idol days. In addition to all the realistic, lush, and brilliant sounds, the arpeggiator, sliders for mixing, and many other features with user friendly technology – it has the hammered action of acoustic piano will full 88 keyboard! As a classically trained pianist – I LOVE THIS!!!!

When I play the Kurzweil synth, I achieve “Singularity” with my instrument. It is my vehicle for expression of sound and music. From the moment I touch it, the ideas in my head are “fleshed out” – Where imagination meets technology!

I spent my entire childhood studying classical piano, playing and singing in the Southern Baptist Church, and touring the Southeast with local bands.  My Mother, Jo Dozier was my greatest influence and inspiration. She cleans my clock on the piano! After majoring in piano at Winthrop University in Rock Hill, SC – I moved to Wengen, Switzerland. Then I took off for NYC where I could scratch the itch to rock!

Eventually, I was able to get work in NYC as a studio musician and a jingle singer. This, along with playing in male gay bars, provided enough money to back my own band – “Judi Dozier & The Differents” with guitarist Rob Alter, drummer Tony Machine, pianist Bobby Blaine, and bassist Larry Russell. We performed regularly in the NYC rock venues.

I was introduced to the synth by Dino Danelli and Gene Cornish [Rascals & Fotomaker] at a rehearsal studio in NYC where I was rehearsing with my own band, Judi Dozier & The Differents. Gene & Dino were rehearsing in the next studio. They got word somehow that I was a pianist, and invited me next door to play synth with their band called Modo.  That was the beginning of my love affair with sound synthesis!  This love affair has continued ever since.

Roy Orbison & Benny Mardones invited me to the Record Plant to play piano and sing for them one night after one of my gigs during Benny’s sessions, on which [then Billy Idol drummer] Gregg Gerson, “The Gersonic Flow” played drums.  Later, Roy and Benny produced me singing my originals along with “Heartbreak Hotel” at the Power Station in NYC.  My band performed on the same bill with Steve Stevens at Tracks in NYC, and Steve got a cassette tape of these recordings.  This was the beginning of my Idol days.

I played keys with Billy Idol during the “White Wedding” and “Rebel Yell” 80’s era, recording & touring.  Billy, Steve Stevens, and the rest of the band were some rockin’ gentlemen!  It was my dream to be in an ass-kickin’, chart topping rock band!  It was, in those days, extremely forward for a male rock group to have a female playing an instrument – females were usually the background vocalists. I did a lot of background vocals in NYC, but I wanted to break through that stereotype. I have been a very lucky musician!

Dan Daley – International Musician and Recording World- ‘84:
“My first impression upon meeting Judi Dozier in the flesh was that this woman is to fashion what Rocky Horror is to Hollywood: Take everything to the max and, when you encounter a rule you can’t deal with, break it, make up your own, and then break that one, too.

Hollywood comes to mind also when you look at a publicity head shot of Judi. Heavily jeweled earrings peak out from beneath a boisterous mane of bleached platinum hair. Her face is angular and pretty, and her mouth is set in a movie star pout that alternately beckons and then says to keep your distance. The eyes give her away, however. There’s an intelligence behind them that is palpable.

She was born a fashionably indeterminate number of years ago in a quintessentially southern town near the birthplace of Andrew Jackson. Beneath an exterior of black leather and serious eye shadow beats the heart of a true Southern Belle. She shares the propensity of most Confederates for being able to put you at ease within the first ten seconds and then keep you there, using her words and soft drawl with which they tumble out. It seems more than a coincidence that Idol’s latest record is entitled, “Rebel Yell.”

“I’ve always loved high energy music,” she says, “and that’s why I love playing with Billy. It’s a different kind of thrill every night on stage when you’re out on the road (with him). “I feel like I really fit in with this band.” The way she puts it conveys a vivid sense of life to the band as a band; more than the sum of their individual parts. It also puts a kind of limit to the fluid structure around her; limits very much needed by her adventurous nature. We’re talking here about a girl who was so scared to come to New York that she decided that she’d take on Europe first as a sort of test. Not Charlotte, not Atlanta. Europe. She passed the test. Europe is still standing, but then, so is Judi Dozier.

The scene cuts to a small southern college. A petite blonde classical piano major walks down the hall with her scores under her arm. She was once approached by the local Jaycees to enter a regional beauty contest because the talent competition had an overabundance of baton twirlers. Not the beauty contest type, she figured to cop the talent scholarship so she could pay for her classes. But something screwed up – she won the whole shootin’ match!

Miss Rock Hill (what a portentously named town) alternated between speeches for garden clubs by day and playing in her bands at night. She’d been playing the piano since childhood, helped along by a brilliantly talented pianist mother who taught her how to translate her emotions into musical feelings. She once dreamed of giving classical concert performances. Along the way, Beethoven began to compete with Berry (as in Chuck) for her affections. As the woman now recalls, that girl on campus began to realize that, “The classical people that I was around never let their emotions show. I think that the originals – the Bachs and the Bartoks – were as much rockers, in their own way, as today’s rockers.”

She came to feel like the outsider at school. Her attitude towards music was the same as it was towards life: to be real. One professor noted this disaffection and gave her the advice she’s followed to this day: play what you love to play.

The college of musical knowledge gave way to the “chitlin” circuit. Still under age in parts of the South, she could only leave the dressing room to go onstage. The bands call her “our baby rocker.”

But on to the test. New York was the ultimate goal, but as Judi recalls, “It was a scary place for a girl who’d never been there.” The next best thing was Europe on student study plan. “I had to go somewhere that would scare me so that when I got to New York I’d be ready.”

She worked 12 hours a day in a restaurant in Switzerland, then sang and played at night. It was a tough existence but then, that was the point of the trip. She threw in the towel at the eatery and gypsied on the trains through the continent, always keeping a ticket to London as the gateway back home.

In Germany she landed a recording deal with EMI, but it proved to be a false start. “They wanted me to change my name. They said, ‘We do not care for der French – Doziaaay.’ I said I’m not French damn it, I’m American.” Her twang causes this to come out sounding like “murican.” “They wanted to change my name to Dazer. I was pissed off, but I wanted the deal so bad that I said OK – later talking them into using my real name. They also dyed my hair jet black. I walked out of the beauty parlor and cried. I went straight to the drug store and bleached it out again.”

“They wanted to use my tunes – I’d began writing seriously in Europe – but they also took a strange approach. She sums up her attitude towards this record in one sentence: I didn’t say to them, ‘This isn’t rock and roll.’ I said, ‘This ain’t rock and roll.’”

Upon moving to New York City in the mid-seventies, she looked for ways to begin her own career while still using music to pay the rent. “Disco was happening. You couldn’t get any other kind of paying gig. It drove me nuts. Then I played solo piano and sang in male gay bars. I liked that because they gave me good tips, didn’t buy me liquor, and didn’t ask me out.”

Income from nightclubs and the odd jingle now and then went to supporting her own band called “Judi Dozier & The Differents.” It was rewarding playing her own material the way she always wanted it played but, “I was putting $1,500 to $2,000 a month into that band. It was killing me so I had to stop after a year. On the night of our last gig, (ex-Rascals guitarist) Gene Cornish came up to me and said, ‘Judi, you’re just what we need.’” “We” was Cornish and another former Rascal Dino Danelli who together had formed Modo.

Another band, an all-girl group called Scarlet Fever, came and went before she received a call to audition with Idol. She fit in well. Her chops and simple approach to playing paid off. With Idol she gets to the realm of the synthesizer more fully, a world to which she had only lately arrived. “I played some (synthesizer) with Modo,” she says, “but before that it was all piano. My biggest influences are still Bach and Beethoven – you know all the classics. Sometimes I’ll hear sections of a song where I’ll say to myself, ‘That sounds like the second movement of such and such. Or, if things are a bit dissonant, I’d hear Bartok. I’d apply those effects.”

Pretty neat story so far, eh. Not so fast. “I don’t feel I should ever become comfortable in any band situation,” she adds, “I’ve been in too many of them.”

After a while you begin to sense a sort of dichotomy in this woman. On one hand is a sweet, sensitive girl with principles and integrity, musical and otherwise. On the other hand is an ambitious woman with clearly defined goals, career and otherwise.

My Ultimate Dream for Humanity:
“To have the ability to transcend our egocentric preconditioning and care so deeply for our children, partners, friends or even strangers that we would put their interest above our own, no matter what it might cost us personally.” – Ramona “The Singularity Is Near”